Humor in Writing: Do we use it? Do we steal it?

Rhobin's April question really made me think.  Are my novels funny, or do they at least have humor?  Have I incorporated true-life humorous events into my books or people I know?

Let's start with my debut novel, The Shadow Warriors.  I used some of my life in the novel: the trip to Singapore, and the university town of Goettingen Germany.  Was anything funny?  Perhaps.  The main character (Emma's)  walk through the dung heap, her cleaning up in a fountain and then squishing through town, joining a demo and subsequently getting on the wrong train.  The character of Peter Weber (based on someone in my writing group) always had a (funny) quip.  I would say the humor was throughout the novel and fairly subtle, not laugh out loud.

World of Mirrors, a suspense novel, also had even more subtle humor and the character of Chuck was funny although he didn't mean to be.  He was a sailor (among other things) and a sailboat was an important part of the plot.  I gave a friend's humor and bossiness on his boat to Chuck.  His ex-wife even recognized it.  Ooops!  Again there is lots of subtle humor--nothing laugh out loud, but it's there, often by showing the good and the bad in former East Germany.

Festival Madness, set at the Burning Man Festival and  in Boston's high tech world, has a lot of humor.  The hacker camp at "the Man" is loaded with funny characters,  all original.  Hackers have a zany sense of humor. The trans-gender character, Daze, had  lovely self-mocking  humor.  I found her at the Norfolk County Jail in protective custody. One of our writers' organization used to tour the jail occasionally. You never know when you'll find a good character, humorous or otherwise.

My latest work, Chased By Death, is a tense story without overt  humor. Not much is funny if you're running for your life from bad guys.

However, my upcoming novel, Murder In the Northwoods (publication delayed by the coronavirus) is loaded with humor.  Because  people are funny in the North Woods.  One of my sons went from  camper to counselor in training and eventually to manage the kitchen  in a camp.  He inspired the entire book (not the murder) with funny stories from the North Woods.  I used a woman priest I knew well in knew in the Northwoods .  She was funny, too. 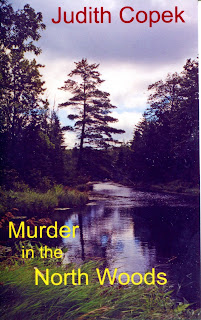 In sum, I use many real life locales in all of my books.  A sense of place is always important to me.  The humor falls where it falls, perhaps inspired by an event, or just concocted to fit the scene or a character.  It is inherent in the scene or the character.  You can't really force humor. A pompous character or one too full or him or herself can always be funny.  It's good to laugh.

These writers will give you their own take on humor in their novels:

Posted by judyinboston at 8:51 PM

It is, indeed, good to laugh. Especially in times of stress. And I agree, often it's our characters who show us where the humor is.

If the humour is forced, it isn't funny or feels out of place. I like to use places I have visited, or compilations thereof, as my settings. Sometimes if I need a reminder of what a place looks like I'll use Google Earth to remind me.