Good and Bad Characters and Why They Must Be Blended

I wrote several of my novels when I still worked in IT, and I was not above using physical descriptions of my co-workers for characters.  Writing The Shadow Warriors, I wrote the "bad guy" close to a co-worker I had no reason to like.  He was bad to the bone.  Then, we both landed on a mission-critical team and I had to spend long hours in meetings with him.  I started to like him  and I could even see his point of view on some topics, a viewpoint I didn't necessarily agree with.   What happened?  The character in The Shadow Warriors, while never good nor even likeable began an imperceptible change.  At the novel's end, the heroine begins to wonder if he was not even a bit heroic. Life impinges on writing, and for the better.

Totally evil characters have never appealed to me. I'm sure the two men (one now dead) who escaped from the maximum security prison in New York had some redeeming qualities. We'll never know if they were ever kind or compassionate, but maybe they shared a deep friendship or a love of nature.  After all they got their jailors to trust them.


Two other examples:  In Chased By Death, a suspense novel now with my agent, I have two bad guys.  One is a young-ish cartel boss who thinks nothing of ordering people killed or "interrogated."  He digs salsa music and loves to dance.  Although he has a mistress in Miami, he loves his wife and sons in Colombia. He doesn't see himself as evil, but rather as a put-upon businessman trying to get "product" into the US.  He hates the Mexican cartels  as much as he hates the DEA.

His henchman, "El Tigre" is the enforcer and occasional executioner, a man feared by all.  I had El Tigre go rougue when his wife got cancer and he needed money for her special treatment.

My latest novel, which is still in the process of revision (will this ever end?) has a character named "Snakes," a smarmy, lecherous man that my heroine does not like and suspects the worst of.  As she gets to know him, she comes to respect his knowledge and she also sees that as a so-called "half-breed," he lives in two worlds and is a part of neither.  She feels that way, too, sometimes, and while she dislikes his lifestyle, she comes to understand his particular dilemmas.  Even the disgusting chief of police becomes a bit sympathetic when she thinks about why no one ever invites him to Sunday dinner and he must dine alone, with only a servant for company.

Your writing will be more nuanced if you give the bad guys their humanity.  And the goody-two-shoes?  Most protagonists are more well rounded emotionally than the bad guys.  Don't forget to make them conflicted. Envious. Jealous. Foul-tempered.  Male main characters can get away with a lot, maybe even murder, but females usually have to show their softer side, even if it's against their will.  Creating well-rounded main characters is tricky.   In crime fiction, they are usually super-stubborn in their determination to solve the crime.  Make them believable.  There is a saying TSTL.  Too Stupid To Live. Don't do that. Dig deeper and you'll discover a way to put them at risk without being foolish.

Writing is hard work, and your characters, flaws and all, need to jump off the page. An  intriguing setting and a twisty plot won't work if the book is stocked by cardboard people.  Make them real and multi-dimensional. Get to know them.  Try to love them.  All of them. 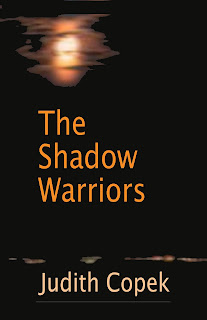 Order The Shadow Warriors on Amazon

Get The Shadow Warriors on Smashwords

Amazon author page
Posted by JudyinBoston at 7:19 AM