My latest novel, a mystery, set in the North Woods of Wisconsin 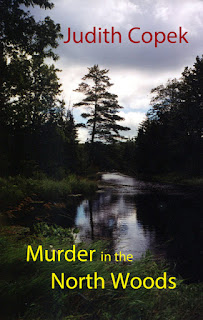 I don't recall any of my characters having favorite words, but they do have unique ways of speaking.  For example, in Murder in the North Woods, the Reverend Josie, an Episcopal priest, likes to pepper  her speech with French words and expressions.  It often stymies some of the folks in the small town who have not had the benefit of Josie's education

In the same novel, the character of Daryl, who descends from Kentucky folks who settled in this area of the North Woods long ago, speaks a dialect that may still have the speech of  some of his ancestors. 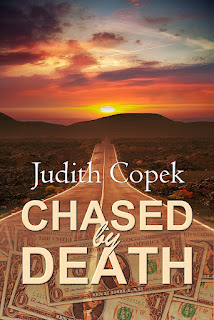 In Chased By Death, my woman-in-jeopardy novel, Lotto, the drug lord of a boutique cartel, swears a lot, in Spanish, or course. Really a lot.  Somehow, in another language, it doesn't sound so bad.  It would be interesting  to play against the stereotype and have a bad character who never says a bad word. This might be a tad unbelievable.  The drug lord by the way, faints at the sight of blood. His henchman, El Tigre, doesn't swear in front of women.  El Tigre is a conflicted character.  He has no doubt killed dozens of people, but he is desperate to find money to send his wife (who has cancer) to the best doctors in the U.S.  No matter how bad my characters are, I always give them their humanity.

Internal monologues differ from spoken speech, and that gives the author a chance to play around with how different characters think rather than speak. Honora, the main character's sister, is a snarky not-very-nice woman we wouldn't want to spend time with in real life, but her speech sounds perfectly normal, and she keeps her thoughts to herself, but of course, the reader knows them.

In World of Mirrors, there is a very bad Englishman, Putnam.  He speaks in an abrupt voice, hates smart women, and likes violence.  BUT, he has a literary side.  In a bar one night,he learns that another character's dog has disappeared.  He actually thinks he knows what happened (he does not).  He adopts the speech about the "nose", which drives Cyrano de Bergerac bonkers, but substitutes all manner of puns about the word "dog."  And her refuses to shut up. So we discover that Putnam has a literary bent, the least likely character.  It is always fun to play against the stereotype, which one can do with speech.

My characters do not necessarily have favorite words, but they do have ways of expressing themselves that are unique to their characters.

As always, my fellow bloggers will have interesting things to say about this equally interesting topic.  Read on!