What Makes A Character Memorable?

I am a collector of characters, starting when I was a girl and read The Little Colonel books by Annie Fellowes Johnson.  How I loved that character!  She was so different than anyone in my Colorado town.  And was she ever spunky.

My next favorite character was Scarlett O'Hara.  Another spunky woman.

Do we see a pattern here?  I admired her tiny waist and her green dress, but it was her bold personality that fascinated me.
A shy kid, I had few characteristics in common with The Little Colonel or Scarlett, but that didn't keep me from fixating on them. And admiring them and even wanting to be like them. Sheena, Queen of the Jungle, a comic book character was brave and daring and got herself into awful scrapes. I cowered and read on.

Anne of Green Gables was another character that I loved.  When our teacher read those books aloud to us, even the rowdy boys shut up and listened. Anne was spunky too, but no Scarlett!

When I began reading the classics, I found a lot of the major characters downright scary.  Ulysses and Achilles were so bloodthirsty! I didn't identify with Madame Bovary or Anna Karenina, but then I read War and Peace and discovered Natasha.  I still always see her as a young Audrey Hepburn.  She was a girl I could relate to. It was a shock at the end of the novel when Tolstoy said she grew fat, but I always thought of her as a slender young girl.

Characters from Lawrence Durrell's Alexandria Quartet have stayed with me:  Justine, Balthazar, Mountjoy and Pursewarden, as well as Clea and Justine and Lila.  Darley and Nessim.  These characters were like no one I had ever read about, not larger than life but living very vivid lives, so different from mine.  I think that the city of Alexandria was also a compelling character.  I read these books over and over, never tiring of them. 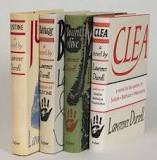 Of more recent vintage is Sue Grafton's Kinsey Milhone, a private detective.  Of course she is spunky, but she also has doubts.  She is never a TSTL (too stupid to live) character.  I can relate to her and I love her sense of humor and fair play. It will. be sad to see the series end.

Do I find any of my characters memorable?  If you have lived with a character throughout a series, he or she stays with you, eats with you, sleeps with you, and hangs out with you.  So yes,  Emma Lee Devens, no better than she should be, is gutsy and sometimes brave, but also sometimes foolish.
I created a character in a historical novel (set in 1928 California and as yet unpublished.)  Carla Curby is loosely based on my mother, but bigger, bolder and yet vulnerable and uncertain.  This was psychologically wrenching to me, because she was and was not my mother at a time in her girlhood that I just had a few clues to work with.  I am sure she is my favorite, although I am now writing about a Mennonite woman, forty years old and a widow, who will solve a crime.  She is another gutsy one who went off to be a missionary in the Congo before World War II.  I like characters who decide to act, rashly or wisely.  The words gutsy and spunky rise up again.


What kind of characters do YOU like?  The authors below will tell you about theirs:

Posted by JudyinBoston at 5:25 PM