Confrontation: The Heart of Conflict 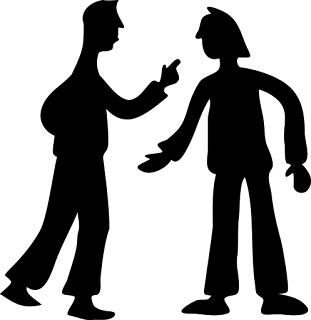 Confrontation:  the heart of conflict

Every writer of fiction needs conflict. Conflict moves your story. The three main types of conflict are:
1)    Individuals or groups against one another
2)    Inner conflict  (within the individual)
3)    Conflict with nature or society
How do we as writers show (remember, show, don’t tell) conflict? By far the best way is through confrontation.
With nature or society, we could show our character(s) fighting a forest fire, or caught in a flood. We could show them in a heated election campaign debate. Always confrontation.

Inner conflict is also at the heart of every great story. The character at war with herself, confronting her worst nature, worst fears, worst deeds.  A character confronting mental illness.  Think of the possibilities.

Conflict between individuals drives nearly all writing. Adam and Eve vs. God, Cain vs. Abel. King Hrothgar vs. Grendel. Agamemnon vs. Achilles.  We could go on forever, and at the heart of every conflict is a confrontation.

Confrontation can be subtle, such as a woman brushing off a man hitting on her, or loud and ugly in a scene of domestic violence. The writer can use body language and emotion to depict these confrontations.

Here are two brief scenes from my WIP, Promiscuous Mode. (A computer term).
Early in the book, the main character, Laura, meets a man who will be her nemesis throughout the story.

Outside, the atmosphere felt close, like the oxygen had been sucked out the air, and the strata of cloud layered the sky in metal shades from pale gray to graphite.
A scrawny guy in dirty coveralls emerged from a pickup parked next to mine.
“Honey bunch, don’t think of leavin’ when I’m coming.” He smirked, running his hand through his lank blondish hair. “Name’s Darrell.”
I gave him a curt nod and unlocked the Datsun’s door.
“Hey, I’m talking to you!” The smirk morphed into a scowl. He took a step toward me, and I smelled his boozy breath and got up close and personal to his bloodshot eyes and whiskery face.
“I’m in kind of a hurry.”
He pushed my car door shut and looked me up and down, then focused his full attention on my chest. “Ah, just have one beer. I’m buyin’.”
“Sorry, Darrell, but I don’t drink and drive.” How lame did that sound?
“Well, excuse me all to hell, Miss Prissy Pants!”
I looked him in the eye, shifted my weight and grasped the car key. He sensed some change in the power dynamics, glowered at me and stepped back. The heavens opened and giant raindrops splattered us.
“Woman, just stand there in the rain like a damn stupid turkey.” He headed toward the tavern.

And here’s a scene toward the end of the book. It’s a lot of fun to write confrontation.

A rupture in the rhythm of the dancers as a rock fractures the surface of a pond gave the first hint of disturbance. The ripples widened and in one pocket of the dance floor movement ceased. The song ended, and the pony-tailed DJ stood up and stared over the crowd.
A furious female voice yelled, “Who are you to be calling anyone a slut?”
The answer was a shriek. Tom looked with horror in the direction of the commotion. I heard Red shout, “Hey, wait a minute!”
Tom said, “Oh my god,” and pushed through the crowd. I followed him. Down on the dance floor Phyllis and Heather thrashed around. Phyllis, with her yellow dirndl pushed up around her thighs grabbed a fistful of Heather’s long hair and yanked it for all she was worth. Heather, screaming and crying, bit Phyllis’s arm, and now Phyllis screeched. Tom dived into the melee and tried to wrest Phyllis away, but in the strength of her rage she held fast to Heather’s hair. Red and Al tried to remove Heather, kicking and flailing, but she clawed at them like an angry cat. It took five men to subdue them. Tom, white-faced and shaken, led a sobbing Phyllis into the house. Heather held her hand to her head as Kelly and another woman helped her down the driveway, past the row of Japanese lanterns toward the street.

Confrontation!  The writer’s bread and butter.

Here are some other bloggers with their own unique views of confrontation. Take a gander.

Posted by JudyinBoston at 5:25 AM